Summer Is Almost Over

Summer is almost over and here in Florida the kids are back in school. Although we have had a great summer as far as fishing in concerned, I can’t wait for fall and with fall will come more great fishing and a bit cooler weather. This was a scorching hot summer, but at least on the water you get a bit of a breeze and it’s nowhere near as hot as it is on land. Another good thing about this summer is we got a lot of things done to the boat in preparation for a busy winter season. New Mercury Verado 350s were installed, boat went to SeaVee for some touchups, and just this past week we had new bottom paint put on. Taking advantage of some slow days this week, we are getting the tackle maintained and are surely going to be ready for another great season.

This month we did a variety of trips from bottom fishing in Bimini, trolling on the edge, mahi fishing offshore and also kite fishing on the edge. Luckily we caught a bunch of fish on every one of our trips. I had gone to Bimini with my longtime client and friend Roger and his son Alex and we had a blast. The yellowtail fishing was good with big yellowtails but the sharks were kind of a nuisance. The best part of this trip was some phenomenal deep dropping with lots of yelloweye snappers and some queen snappers. We have 5 hooks on our deep drop rig and multiple times we had 5 fish on at one time. We are scheduled to go again with Roger but this time we will be getting the wahoo gear out. 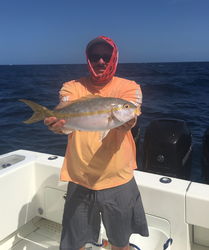 We also did some mahi trips in the Gulfstream and were very fortunate to catch a bunch of mahis on each trip. The fish are a little bit bigger than the mahis we caught last month but we still didn't land any slammers this season yet. I’m pretty sure we will see a 40 plus pounder any day now. Besides mahis we also found a few weehos on floaters offshore. These wahoo typically are smaller when you find them under floaters in the Gulfstream, but they still taste very good and wahoo are actually my favorite fish to eat.

Being that it is August and the ocean is very warm, we also trolled planers on the edge and that was extremely productive. We did catch a nice 30 plus pound wahoo the other day with a planer and a trolled ballyhoo. Mostly with the planers though, you will have non-stop action with bonitos and some action with kingfish. 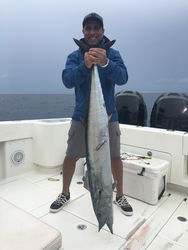 We had two trips that there was a fair amount of wind and we were originally going to go mahi fishing but when we crossed the edge we were greeted with purple blue water and 3 knots of north current. If it wasn’t for the fact that it was over 90 degrees, you would of sworn it was January. We stopped and put out the kites and the live baits and we caught 3 out of 4 sailfish plus bonitos, some kings and a tuna. The next day we had the same conditions and we did the same thing catching 2 out 3 sails plus kings, bonitos and a tuna.

Now we are quickly approaching September and September brings with it one of the best months for daytime swordfishing. I have been on a bit of a dry spell with the swords, but I can guarrantee you that is going to change this upcoming month. I wish I had a sword trip last week, as the reports I got were all spectacular with quite a few boats catching multiple fish. Nothing huge was caught, but that all changes in September through November when the big and small fish move in. September is also the beginning of wahoo season in Bimini and I already have a couple of trips scheduled.
I am really looking forward to fall and winter and now is the time to start looking at your schedules and booking trips for swords, sails and wahoo.