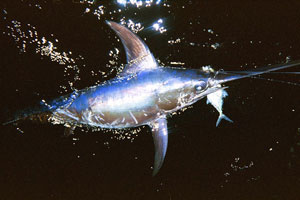 Swordfish — Gladiator of the Sea — Prince of Darkness. These names may well describe the toughest predator in the ocean. In fact, many seasoned anglers, captains and fishing magazines have voted the swordfish as the toughest adversary to be encountered on rod and reel.

Not only does this magnificent fish have toughness, but also the speed and agility of the mighty swordfish can defy logic. How can a fish hooked 300 feet deep jump in the moonlight only seconds later and then with full drag on an 80 wide, takes you down 500 feet in mere seconds?

For many anglers seeking to accomplish catching all the different species of billfish, swordfish is usually the hardest adversary for them to conquer. We are blessed to have this great fishery in our backyard and proud that we can offer swordfish trips to our clients. In South Florida, we have a year round swordfish season and our swordfish grounds, out in deep seas, are on average only 20 miles from Miami's shoreline where we depart.

Miami - A Nursery For Swordfish

The area off of Miami is important to the well being of the entire North Atlantic swordfish population. It is well documented that this area of South Florida is a nursery area for swordfish. Because of this, this area is well protected from commercial interests and is well regulated for recreational efforts.

Because this is a nursery area it doesn't mean that the fish we catch on our swordfish trips are all pups. We do catch some swordfish that are small, but because we are catching them on rod and reel, these fish can be successfully released. We also catch fish that are in excess of 300 to 400 pounds. 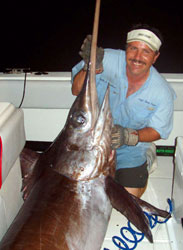 What needs to be understood is that even a 100 pound swordfish can be quite a battle on 80 pound class rod and reel. A 400 pound swordfish is a battle of epic proportions. It is not uncommon for anglers in South Florida to hook swordfish and fight them for 8 hours. Some of the fish caught weigh over 300 pounds, but some are lost and the size can only be assumed to have been even greater.

The tactics we use to fish for swordfish off of South Florida are drift fishing live or dead baits or a combination of live and dead baits. Large blue runners, tinker mackerel, goggle eyes, etc. are often the live baits chosen, and dead squid are usually the preferred dead bait.

Chemical or battery operated lights are attached close to the bait and with the aid of a large sinker, the bait is suspended anywhere from 50 feet to 500 feet deep. Several rods are deployed like this and then the wait begins. Although the nighttime fishery has slowed down a bit in the past few years, the possibility of hooking a fish of a lifetime is very possible on any given night.

In my opinion, not much can beat the excitement of watching a huge broadbill jumping in the moonlight while your electric light is trailing behind. The rod is bent over and you're in the harness having the fight and thrill of your life.

We have now also developed a technique to catch swordfish during the day. While this has been done for years in foreign countries like Venezuela, the speed of the Gulfstream along Florida's coast was an adversary that many thought couldn't be overcome. Utilizing new space age braided lines, coupled with a heavy lead, we are able to get a bait to the bottom and using the boat, we can keep the bait on the bottom. 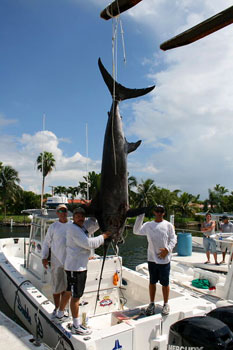 For the most part, during the day, swordfish are found on the bottom and it is critical to keep your bait as close to the bottom as you can. We can utilize either electric reels, manual reels, or our new Hooker Electric Shimano 80W electric/manual combo.

The swordfish that we have been catching during the day are typically much bigger than the average swordfish caught at night. We have now successfully landed swordfish over the 600 pound mark and numerous swordfish over the 300 and 400 pound mark. Trust me when I tell you, the sight of a 400 pound swordfish just feet under the boat during the day is awesome. Just imagine getting a bait to the bottom in 1600 feet of water, watching the rod tip twitch, then bend over. As you are reeling the fish up, you see a huge broadbill jumping in the sunlight. You now realize that that swordfish jumping is the one on your line. The adrenaline is running as you are closing the gap between you and the fish. Seeing a swordfish during the day is amazing and not many anglers throughout the world have been able to do this.

As I mentioned earlier, it is a privilege to have this fishery so close to our marina in Miami and it is a privilege for me to put my clients on a fish of a lifetime. We need to protect and manage this species as carefully as possible. With that said, come on out and lets tackle the most magnificent gamefish in the world!

Ready to experience a day time or night time swordfishing trip? Maybe you want to combine it with fishing for other species? Call Captain Dean Panos on (954) 805-8231 or email [email protected] to get in touch.

Want to learn more about our fishing trips? Read our charter information page.