We are now definitely in sailfish season and that is the type of charters we are doing the most, but we also did a Bimini wahoo trip in addition to our kite fishing trips. The Bimini wahoo trip was really slow but we did get some fish as well as some real nice wahoo. The biggest one was 55 pounds on the scale and it was a beauty of a fish. There was a tournament that weekend in Bimini and I was told our fish would have won biggest fish and if we had entered the tourney it would have given us over $95,000. Oh well that's the way it goes but it was a fun trip with some good guys. 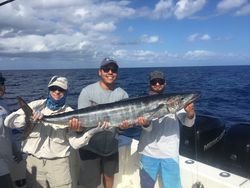 Most of our trips have been kite fishing trips on the edge primarily focusing on sailfish, and the sailfish for the most part have not let us down. We have caught sailfish on all our trips with the exception of one trip. Even on that one trip there were sailfish caught around us but we drew the unlucky straw that day although we did catch half a dozen very nice mahis including one over 20 pounds, so I don’t think we were that unlucky. Lately the sailfish have been out a bit deeper than normal and that is because the edge has been pushed out and even with an east or northeast wind it simply refuses to push in. That's ok though because there have also been quite a few mahis on this deeper edge and while you are waiting for a sailfish bite, you often catch a few decent mahis on the same kite baits. Besides mahis and sailfish, there other species have not really been around in decent numbers. The kingfish bite has slowed down a bit. There are some small blackfin tunas around and we had our first yellowfin tuna bust on a kite bait this past weekend. This fish was an easy 60 to 70 pounds and it skied on the middle left kite bait. It had the bait in its mouth and crushed it but missed the hook. It was still quite the sight to see. 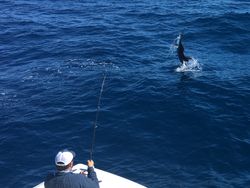 We are also in the holiday season and I still have two or three openings around the holiday week. So if you have people coming to town or are coming to Miami, it's a great way to spend the holidays going fishing with friends and family. I also offer gift certificates, which are quite popular this time of year. If you have someone in your life that you simply don't know what to give him or her, what a better gift for a fisherman than a fishing trip on the Double D.