We were very fortunate with Hurricane Irma as both the house and the boat made it unscathed. The same can’t be said about many people in the Florida Keys and on the west coast of Florida and our prayers and thoughts are with them. What amazed me the most from this storm is the amount of my customers who reached out to me before and after the storm to make sure we were ok. I even had a customer offer up his spare bedroom in North Carolina if we took the option of evacuating. Those thoughts and gestures mean the world to me and won’t ever be forgotten. As I mentioned, we were very lucky. The marina was basically unaffected and is now open again. Power is up and running in almost all of South Florida and whatever outages there are, will be fixed by tomorrow. 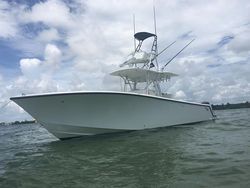 We actually did a few trips already. One trip was to Bimini to check on one of my longtime customers and friend’s house in Bimini. His house pulled through just fine but there was a lot of dock damage to most of North Bimini and some minor roof damage to some homes. We also did a daytime swordfish trip, but unfortunately we didn’t get any bites that trip but there were one or two swordfish caught the day before. On the way in we did stop and did some dropping for black belly rose fish and that was a huge success. We made three drops and each drop we caught 5 Rosies.

What is a bit bothersome though is the turbidity of the water due to the storm. As expected, there is a lot of debris both in the bay and in the ocean so you really need to be careful and be constantly looking for debris. I definitely would not be running at night for the next week or so, until most of this debris clears out. The good news is that there have been quite a few decent mahis swimming with the debris. The water close to shore and in the bay is pretty brown as that is quite normal after a storm. The offshore water though has also been affected. There is a lot of turbidity in the water from water being tossed around and also water flowing northward from the areas impacted in the Keys. The good news is that this turbid water will definitely be out of here in just a few days. The Gulfstream is constantly flowing north and flushing the ocean. A good friend of mine flew down to the lower keys and witnessed the same turbid water up to the lower keys but they flew a bit farther south and saw some of the cleanest and clearest water they had ever seen. Even the pilot had commented on how clean the water looked, so it is just a matter of a few days until that water makes it up here.

Now that this storm has cleared it is time to get back to work. We have had a lot of cancellations so it is time to concentrate on fishing and getting our lives back to normal. The next few weeks and even a few months we will see the best daytime swordfishing of the year. We will also see the best wahoo fishing in Bimini. It is also the beginning of sailfish season. Summer is over and fall is upon us so whether it is swordfish, wahoo, sailfish or mahis, now is the time to get back out there. Also if you are a local, believe me, there is no better way to remove all the stress of the storm by getting out and enjoying a beautiful day on the ocean. The water has been flat calm lately and I can’t tell you how much better I felt the first day back on the water and away from the stresses of the storm. So lets get out there and have a great day on the water!