The fishing has been pretty good but business has been slow. I guess a lot of people are thinking that Miami got messed up with the Hurricane, but that really is not true. At best we had some downed trees and lost power for a few days, but now power has been restored to everyone and it is business as usual.
As I mentioned, fishing has been pretty good. There are still a lot of kingfish on the reef and can be caught either trolling or live bait fishing. There are also a few wahoo around on the edge and quite a few wahoo in the Bahamas. The sailfish are still not here in big numbers but if you put in your time, you can still get a few bites a day.
Farther offshore there are still some mahis around and now are mostly gaffers and some bigger schoolies. Most are 10 to 20 pounds with some bigger ones mixed in as well.
Last week I helped deliver a 66 Viking sportfish from Cape Cod to Palm Beach, so I did not fish here in Miami at all. The previous week we had two trips on the edge and one trip offshore for swordfish. The trips on the edge were productive with a limit of kingfish each time and some bonitos mixed in. Towards the end of one of our trips, the tide was just right and we headed into Government Cut and saw a bunch of mullet pouring into the cut. We quickly cast netted a few mullet and started slow trolling them in hopes of a big tarpon. I love it when a plan comes together, because within 20 minutes we were hooked up to a decent 80-pound tarpon on 20 pound spinning tackle. The tarpon put up a show and fought hard but our angler fought harder and soon enough we had the big tarpon next to the boat for a healthy release as well as some quick pictures.
We also had a daytime swordfish trip and although the swordfish have been around, it seems that we always pick the wrong day when we go and nobody gets a bite that day. Well our luck turned around and on our second drop of the day we got a super subtle bite. Lowering the bait to the bottom to entice a better bite, we soon loaded up the rod and the fight was on. It is quite the anticipation as you are bringing this fish up from 1800 feet of water. You wonder how big the swordfish is, is it really as swordfish and not some other denizen of the deep, will the fish stay on the whole time. All these thoughts go through your head as you are concentrating solely on catching this fish. We got the windon to the tip, took off the heavy lead that is needed to get the bait to the bottom and now could see the still very frisky swordfish thrashing his bill and trying everything to get off the hook. The fish tried running under the boat, through the motors, almost jumped, but whatever he did we stayed one step ahead and finally were able to get the swordfish next to the boat. It wasn’t the biggest sword but at 90 pounds it put up one heck of a fight and we were stoked to get him on board. The next drop we got another bite but this time the fish came off after a few minutes. Our last drop we hooked a shark and came back with no hook and no bait. It was a great day though with calm seas and great clients. 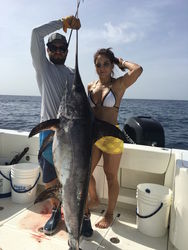 The next few weeks we have quite a few swordfish trips booked as well as a few trips to Bimini for wahoo but only have one or two trips booked for fishing on the edge. The fishing is good so now is the time to book your trips and lets go ctach-em!